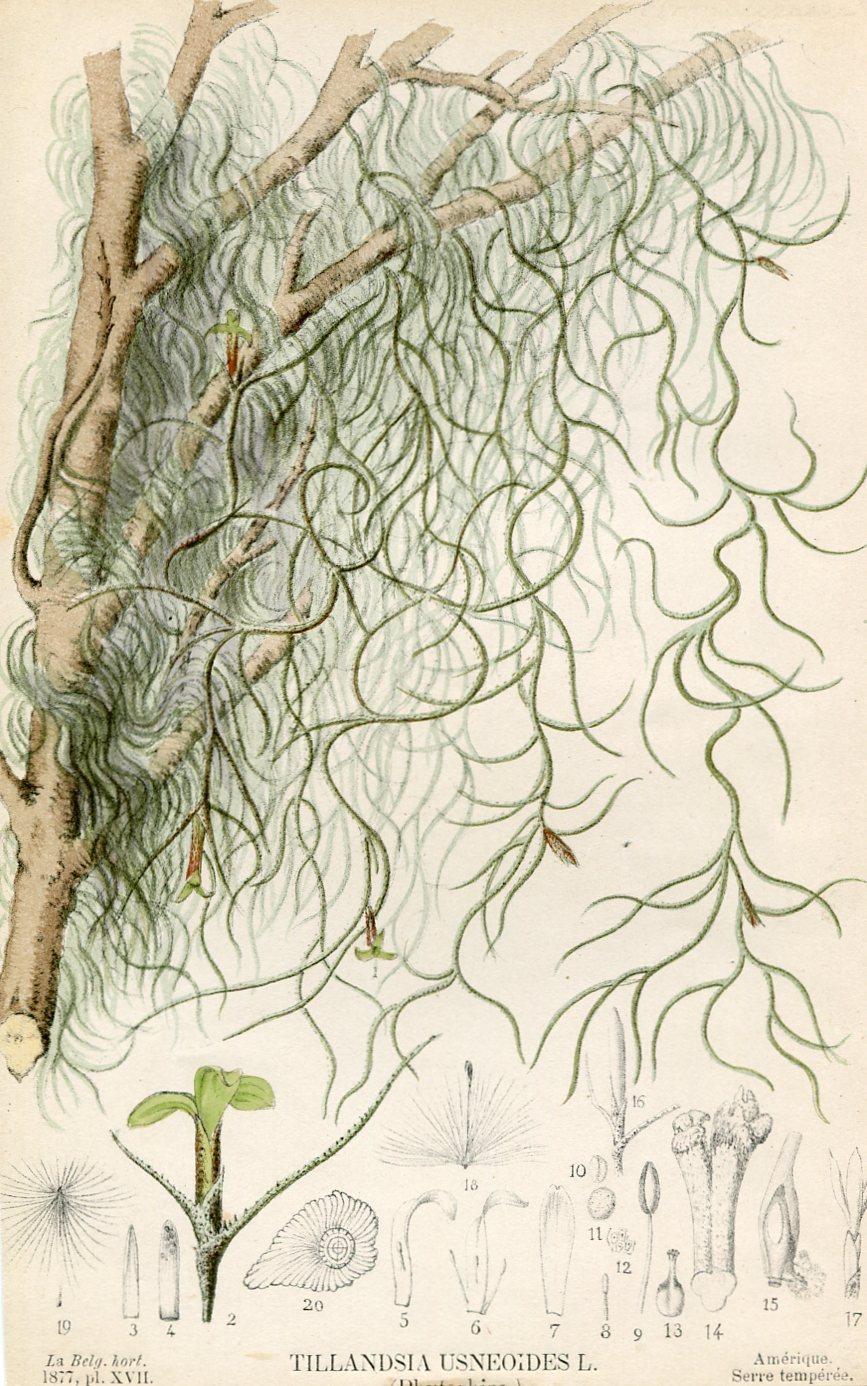 Spanish moss isn’t really a moss at all; it’s an epiphyte or air plant. Botanically, it is closely related to the pineapple and absorbs nutrients and water through the air and rainfall. It does occasionally flower but it is rarely seen. The silver-gray plant grows in long, hair-like clumps, hanging from trees in subtropical climates.

It is commonly found living on the southern live oak (Quercus virginiana) and bald-cypress (Taxodium distichum) in the lowlands, swamps, and marshes of the southeastern United States and can be found as far west as Texas and southern Arkansas. It does not harm or kill the trees it lives on.

William Bartram described it, and its uses, in his 1770s travels to the area:

When fresh, cattle and deer will eat it in the winter season. It seems particularly adapted to the purpose of stuffing mattrasses, chairs, saddles, collars, &c. and for these purposes, nothing yet known equals it. The Spaniards in South America, and the West-Indies, work it into cables that are said to be very strong and durable; but, in order to render it useful, it ought to be thrown into shallow ponds of water, and exposed to the sun, where it soon rots, and the outside furry substance is dissolved. It is then taken out of the water, and spread to dry; when, after a little beating and shaking, it is sufficiently clean, nothing remaining but the interior, hard, black, elastic filament, entangled together, and greatly resembling horse-hair.

In the modern era, Spanish moss has been used for building insulation, mulch, packing material, mattress stuffing, and fiber. It was even used in the padding of car seats by Henry Ford who had a home in Richmond Hill and a dealership in Savannah.

The etymology for “Spanish moss” is not known although it is often supposed it is related to a term used by French settlers in the southeastern U.S. in the 1700s. They called it barbe Espagnol, or Spanish beard, referring to the long beards popular among Spanish explorers of the era. It has become an iconic image of the South, including in Southern gothic literature and in folklore. 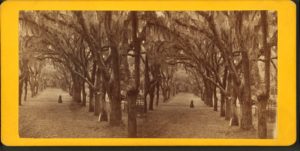 Image from NYPL Digital Collections. Live Oak Avenue, Bonaventure Cemetery, Savannah, Ga. Stereograph. 1880. The description on the reverse reads, in part: “The majority if these trees are of the Live Oak species, with but few others. The latter have long since passed away, but the sturdy oaks, with their hoary beard of moss, still defy the gales of the Atlantic and wintry blasts; and their rustling leaves whisper a ceaseless lullaby to the quiet and peaceful sleepers at their feet.”