This past week, Dr. Checo Colon-Gaud’s research lab and I were able to attend the Joint Aquatic Sciences Meeting (JASM) in Grand Rapids, Michigan, to share our research with the broader scientific community!

Scientific conferences are one of the best ways for scientists to connect with the larger research community to enhance and spread our research impact. JASM was certainly no exception, as it is the premier aquatic sciences conference in the world. In addition to seeing lots of fascinating talks in our field and great conversations with colleagues, I was able to share a poster presentation on the research efforts that we have been conducting on crayfish of the Ogeechee basin.

Lots of people walked by my poster and talked with me about their experiences working with crayfish and coastal plains organisms, and I certainly think I learned immensely from conversations with other scientists I interacted with. Certainly the most common comment on my research was related to how little we know about crayfish of the coastal plains.

Moving forward from this amazing experience, I hope to utilize the knowledge I gained as well as the connections I forged to help me tackle my research in the best way possible. This is not only done by using the best methods or researching the most important topic, but also by collaborating with a diverse group of scientists and the broader public to have the most prominent impact.

The next big aquatic sciences meeting is in Australia next summer, so we’re already looking forward to expanding our connections on a global scale!

What kinds of crayfish might you expect to find in the Ogeechee?  With so much aquatic diversity in the basin, what you might see in the upper part of the basin can be completely different from what you might see near the coast. That’s because, even though the river is well connected from top to bottom, the habitats found in the upper part of the basin are completely different from the coastal habitats.

The headwaters of the Ogeechee form on the far extent of the Piedmont (the geographic region separating the coastal plain from the Appalachian mountains) making for clearer and swifter flowing water. But as the Ogeechee slowly snakes its way towards the coast, the water starts to move slower and slower, becoming much darker due to the leaching of tannins. Understandably, these stark differences result in differing crayfish fauna.

In the upper part of the basin, the Variable crayfish (Cambarus latimanus) and the Brushnose crayfish (Procambarus pubsecens) are two commonly found species that are strongly associated with this part of the basin, and are rarely if ever found downstream of Millen, Georgia. The Variable crayfish is one of only a couple of species within the genus Cambarus found within the Ogeechee basin, with the vast majority of other species belonging to the genus Procambarus. This is because, in general, Cambarus species are strongly associated with more rocky streams, like those found in the Piedmont. The Brushnose Crayfish is very similar to other Procambarus species found throughout the basin, with the namesake difference being dense hairs along the rostrum (nose area) of the crayfish.

Hopefully this brief introduction to some of the crayfish found within our basin encourages you to get out and explore some of the novelties that make this basin a special place!

(All photos courtesy of Chris Lukhaup and Chris Skelton)

Why should we care about freshwater organisms? This is an incredibly common question directed towards freshwater ecologists like myself, and it’s completely valid. Why spend all the time and effort to study things that appear to have little to no impact on human welfare? While the ultimate answer to this question is nuanced, one of the most important reasons why we as scientists care about them is their use as bioindicators.

The concept of a bioindicator is fairly straightforward, generally referring to the use of a living thing (bio-) as an indicator for the health of the ecosystem it lives in. For example, let’s say that there’s a rare crayfish species that is known to only occur in pristine habitat with very clean water, and has no tolerance for pollution of any kind. Therefore, if that species is found, scientists can use it as evidence that the stream it was found in is very healthy. On the flip side, if the only species that are found in a specific stream are fairly common and can tolerate a large range of conditions, then these species might indicate that that stream has poor water quality.

Beyond being good “tools” for humans to assess the health of our ecosystems, different freshwater organisms serve distinct purposes in the aquatic food web. This is especially true of crayfishes, which are commonly viewed as “keystone” species. A keystone species is one that performs such an important role in an ecosystem that without it, there would be a large-scale detrimental effect on the rest of the ecosystem.

The crayfish is a keystone species for a variety of reasons. Firstly, crayfish are omnivorous, eating all kinds of different things in stream ecosystems, from other smaller insects to plant matter. Secondly, crayfish are important food sources for larger predators, like sport fish and amphibians. This combination of  eating and being eaten by so many different things make crayfish an integral part of aquatic food webs.

Thirdly, crayfish act as “ecosystem engineers” through the creation of burrows. Many of you may be familiar with crayfish burrows that you see on land (check out this article), but what many people don’t realize is that all crayfish burrow to some extent. In stream ecosystems, these underwater burrows act as key habitat for other freshwater organisms, and therefore harbor the diversity of life that is important for healthy streams.

With spring already in full swing, I’m sure many of you will be seeing crayfish a lot more often, and I’m excited to write more about what you may see out in the watershed.

Hi everyone! I’m incredibly excited and I figured I would use this first post to provide a bit of background on myself, what I’m hoping to get out of this research project, and why freshwater critters like crayfish are so fascinating!

I was born and raised in Ohio, and have been interested in the natural world my entire life. I grew up hiking, kayaking, and climbing, and knew that I wanted to have a career that would allow me to explore nature and to help conserve the land that I was recreating in. This led me to pursue a degree in environmental science at Ohio State, but it wasn’t until I lucked into a lab research job studying stream ecology that I found my passion for the animals that call the freshwater their home.

Of course, like every little kid, I had spent time growing up playing in creeks and knew about some of the weird things that you could find in streams. But it wasn’t until I started really spending time doing biological surveys that I discovered how much beauty and diversity lies under the water. That’s why I decided to come all the way down to the southeast for graduate school; I wanted to be in an area that harbored a large diversity of organisms, and that’s exactly what Georgia has.

While Ohio is home to roughly 20 crayfish species, Georgia is home to over 70 (!), the 4th most in the U.S. behind Alabama, Mississippi, and Tennessee. This incredibly high diversity is due to a lot of different things, but one of the main reasons is that crayfish often have very specific and restricted ranges, whether due to geographic barriers or very specific life history traits that allow them to only occupy very specific areas. If you’re interested in learning more about some of the biodiversity of Georgia crayfishes, Georgia DNR has amazing resources for experts and amateurs alike.

One of these species that has a very specific range is the Ogeechee Crayfish, or Procambarus petersi. Found only in the Ogeechee and Canoochee basins, very little is known about P. petersi beyond the fact that it is a stream-dwelling crayfish. What I hope to do with this project is to better understand this species range within the basin, what its habitat preferences are, and how it interacts with other species within its habitat.

Next month, we will start doing some of our first surveys of the basin, and hopefully start catching some petersi to show everyone! I’ll also dive into why conservation of aquatic organisms matters in the first place, and what specific roles crayfish play within aquatic ecosystems.

The annual fellowship will provide research opportunities in the watershed

Ogeechee Riverkeeper (ORK) has launched a new research fellowship to be filled each year. In 2022, the ORK Research Fellow is Brian Bush, a first-year graduate student at Georgia Southern University, pursuing a master’s degree in biology. The fellowship is underwritten by investments secured from the 2011 fish kill settlement.

The Ogeechee River Basin is home to 16 different native crayfish species, including Procambarus petersi, an endemic species commonly called the Ogeechee Crayfish. The project aims to document riverine crayfish populations and distribution, with a focus on P. petersi, and provide education and outreach opportunities throughout the watershed. Throughout the fellowship, Bush will be sharing blog posts and photos of his time in the field and in the lab.

Bush will lead the research project with the supervision of Checo Colón-Gaud, Ph.D., professor of biology and associate dean of the Jack N. Averitt College of Graduate Studies at Georgia Southern University. Bush earned a bachelor’s degree in environmental science from The Ohio State University, with Honors Research Distinction from the School of Environment and Natural Resources. During his time at Ohio State, Bush conducted research with Dr. Mažeika Sullivan in the stream and river ecology laboratory. After graduation, Bush worked for the Nevada Bureau of Land Management, conducting stream surveys in northern Nevada and southern Idaho. 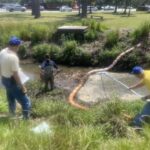