Once thought to be extinct, the robust redhorse has been rediscovered and stocked in a few waterways, including the Ogeechee River. Missing from the scientific record for 122 years, it was conclusively identified again in 1991.

A sizable fish, they can be up to 17 pounds and live nearly 30 years. They are in the sucker family and eat bivalves, using strong teeth for crushing and grinding. This is especially helpful to natural populations as they will consume the invasive species of Asiatic clam. However, the fish will also consume aquatic insects.

With such a gap in the known history of the animal, scientists are still learning about the species. They seem to require still or slow-moving areas with gravel or silty beds for spawning. Once they reach adulthood, they prefer to live in riverbanks with woody treefall or branches. The health of the population is threatened by habitat loss, primarily from sedimentation. 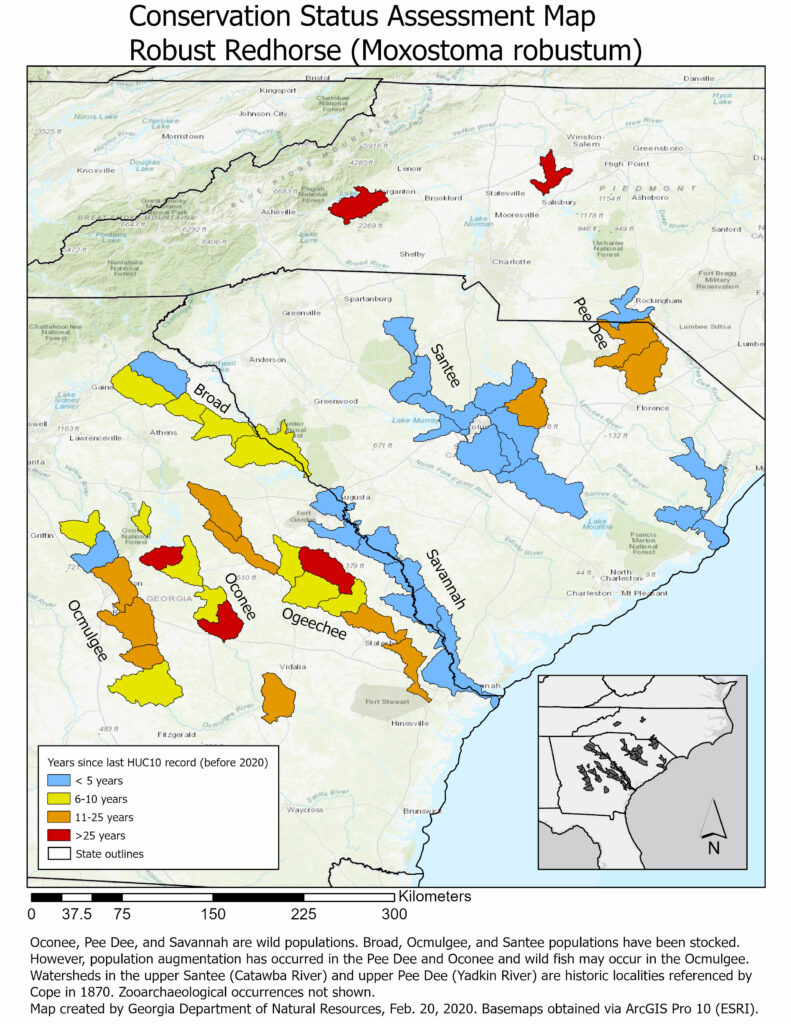 Since its rediscovery, there has been a current Memorandum of Understanding (MOU) recognizing the importance of the robust redhorse and its delicate situation. The MOU includes the GA Department of Natural Resources, NC Wildlife Resources Commission, SC Department of Natural Resources, US Fish and Wildlife Service, US Geological Survey, US Forest Service, Duke Power Company, Georgia Power Company, Georgia Wildlife Federation, South Carolina Aquarium, and South Carolina Electric and Gas Company. The parties agree to be actively committed to the restoration of the species.

The Ogeechee River was chosen as a site to stock because of a lack of invasive predators, some gravel spawning areas, and a lack of major impoundments. From 1997 to 2004, about 43,000 young robust redhorse, were released into the Ogeechee River at three different locations.

Followup research in 2008 and 2011 found that the stocked fish were growing and reaching maturity, but that spawning has only been successful in one location near Louisville. Work still needs to be done to make sure this rare species can thrive in the Ogeechee River and throughout the southeast.